The Forth & Clyde canal goes on… and on…

Today has been hard – and it should have been easy.  Physically it should probably have been the easiest terrain of the whole trip: I doubt that I have climbed as much as 50m.  The problem was psychological.  This was the third day walking along the canal.  Nothing really happens.  The scenery is largely farmland, there are very few locks and no canal traffic.  In summary, it is boring, especially if you are on your own.

Anyway, I left at 7.45 and got onto the canal at 8.30.  Six hours and around 16 miles later I reached Kirkintilloch and left the canal behind.  I almost forgot to mention that I switched from the Union Canal to the Forth and Clyde Canal at the Falkirk Wheel, used to lift barges between the two waterways.  As with the Kelpies, this is a must-visit attraction.  Unfortunately nothing was moving on the canal so I did not see it working.

The Forth and Clyde Canal does not seem to get much use.  Nothing was happening at the marina near Kilsyth, despite the fine weather.

The section across Dullarur Bog was almost my nemesis.  Admittedly it is interesting from an industrial engineering point of view: the embankment had to be built up 16m and allowed to settle before construction of the canal could take place.  Nevertheless after 6k of nearly arrow-straight walking it had lost its appeal. Even the heron walking down the path with me seemed to be suffering from depression.

At long last I arrived at Kirkintilloch, and said goodbye to the canals until after Fort William.

It was almost out of the frying-pan into the fire, as the next 5k was on a straight abandoned railway.

I hurried on to Milton of Campsie’s Old Station where I stopped at a very fine bench.  I was minding my own business when I was asked to film and direct an advert for an upcoming event in the village.  I think they might have got the wrong Neil Jordan! 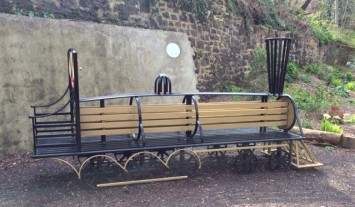 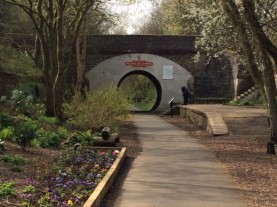 Given all that had happened – or not – during the day, it was with some relief that I arrived at Lennoxtown at 3.45.

I have covered over 60 miles in the last 3 days, around 45 miles of which has been beside the canals.  The tarmac surface is hard on the legs, and I am heartily thankful that after tomorrow I will get back onto more normal terrain.