Today was another long day as I combined two sections of the path.  The cliff scenery was magnificent, but you earned the right to enjoy it due to the nature of the trail.  In the past two days I have not seen anyone else on the path.

Rather than give a description of the route, I am going to let the pictures give an impression of the day and just make a couple of comments.

The trail is new as a through route, but it is obvious that hardly anyone walks it.  Most of today was spent outside or inside the cliff boundary fence.  Outside, you are very near sheer drops at times and you definitely don’t want to slip or trip.  Inside, cattle have reduced many of the fields to a rutted uneven horror which is unpleasant to walk on.  Many of the stiles, where they exist, are topped with barbed wire, and the Trail signage is at best sketchy.  It will definitely improve over the years as more people walk it, but the walking conditions are much tougher than the South-west Coastal Footpath, which is probably a good comparison.

Right, now for an angry old man rant.  Many of the geos (zawns) I passed today were unofficial rubbish dumps.  These places are very beautiful and isolated, so it’s not being done by fly-tippers.  I am afraid that the culprits are the local farmers who seem happy to dump any old thing down the cliffs.  It is not a great advert for the country, and I will only say that it doesn’t seem to happen in Devon, Cornwall or Wales.  Rant over.

Today was the last of the long days, and I am looking forward to more fantastic scenery and views in the next parts of the journey.

Dornoch turned out to be a charming little town.  I left the hotel at 8.10 and walked down past the Market Cross and Cathedral before regaining the trail.

At last I had some coastal walking, first beside the Dornoch Golf Course, and then onto a disused railway track to the little village of Embo.  From there I followed the railway once again to reach Loch Fleet.

The walk around Loch Fleet was very pleasant, even if it was on a road.  I passed Skelbo Castle, and then had a nature-packed few miles.

A stoat ran across the road a few metres in front of me, and then a seal surfaced on the loch.  As the tide was in there were few waders around, but the loch was full of Eider Duck, and hearing their mewing call was a delight.

I delayed walking along the A9 for as long as possible by using a woodland path, but was forced onto it at the causeway of The Mound in order to cross Loch Fleet.

From the A9 a short section in a wood led to the railway line, which I followed across fields.  Inevitably I had to cross one field of cows, calves and a large bull.  Luckily they were all quite nervous, and the bull hid behind the cows. The farmer’s sign saying “Cattle in field.  Enter at your own risk” was not very helpful when you really have no alternative.

After a short section of road and a beautiful wood, I returned to the coast and another golf course.  Golspie was now in sight, and I arrived at the town at 2.50.

I managed to get some tea at a cafe, but eating tonight will be problematic.  There is very little choice, so it will probably be fish and chips.

I have a very short day tomorrow – only 10km or 6.5 miles. As I will be passing Dunrobin Castle, I am going to spend some time there before going on to Brora.

When I left Dornoch, there was a trail sign saying John O’Groats 162km.  As today’s walk was 22km, which is the same distance between John O’Groats and Dunnet Head, tomorrow I shall be less than 100 miles from the end of my trip.

As I only had 22k to travel today I had a leisurely breakfast, probably the best of the trip so far, and left at 8.50.

The hotel was just next to the Strathblane Railway Trail, so it was easy to rejoin the route.  Once again most of the day followed the Blane Valley Railway and the walking was easy but not inspiring.

Around Lennoxtown someone, presumably the parish council, had placed green bags for dog waste every 100m or so.  This seemed to work, as the omnipresent black and green poop bags were no longer decorating the trail.  Dog walkers must be the most forgetful people: “I’m leaving it but will pick it up on the way back”.  End of grumpy old man’s rant.

One bright spot was seeing a dipper in the nearby Glazert Water.  Dunglass Hill caught the eye just before Strathblane.  I stopped near the church for a short break and arranged to meet my friends, Nigel and Sue, for dinner this evening.  We were all at Swansea University together in the far-distant past.

Back on the Blane Valley Railway it was more of the same, until I reached Dumgoyach Farm and joined the West Highland Way. Over to the north the twin summits of Dumgoyne Hill were striking, as was Duntreath Castle, pretending to be a French chateau. 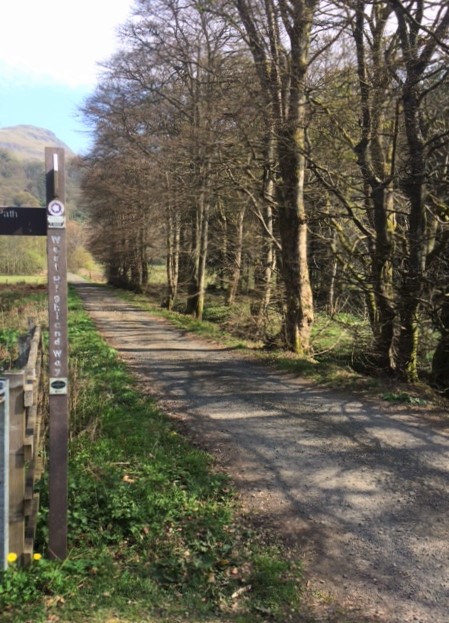 Onto the West Highland Way (WHW) and guess what?  It followed the railway.  The only difference was that I kept tripping over other walkers who were on the path in droves.

Four miles later I finally left the railway and immediately got onto a road, which did little to add to the excitement of the day.  The road led me to Drymen where I arrived at 2.10 to make it effectively a half-day.

The past few days have been a classic example of “Be careful what you wish for”.  Last year when I was spending days in Cornwall and Devon going up over headlands, and then down to the beach, and repeating this ad nauseam, I would have given almost anything for a few kilometres of flat level footpath.  But you can have too much of a good thing, and now I am looking forward to some variety and the superb scenery which I know awaits me over the next few days.

After a comfortable stay at Huddersfield and a taxi back to Marsden, Wyn and I set off at 8.10.  A steep climb led up to Slaithwaite Moor and the first reservoir of the day.  From the Moor we descended to Dearhead Reservoir and crossed the M62.

Passing another reservoir, we ascended over Blackwood Common, before dropping again and then climbing up and over to Baitings Reservoir.  We were beginning to feel like men employed by The Grand Old Duke of York.

Now we had the big climb over Manshead End.  This passed quickly and we stopped for a quick sandwich on the summit.  Crossing Great Manshead Hill we suffered from the low temperatures and high wind and were glad to walk down to Crag Vale.

At this point the day went downhill fast – both literally and metaphorically.  The pull up to Old Crag Hall was tough.  Beyond the Hall the guide book description no longer matched the routes of the paths on the ground.  Unfortunately although the paths had been changed, they were not adequately signed.  We became “temporarily misplaced”.

While I was trying to sort out exactly where we were, the farmer’s wife and son arrived. They were able to get us back on track.  I am afraid that they were a bit annoyed when I suggested if they were going to change the paths, they might like to have them signed, and also repair their appalling stiles!  It was the end of a long day and we had spent valuable time faffing about quite unnecessarily.

Now back on route we climbed up onto Erringdon Moor.  Still annoyed at losing time, I made the elementary mistake of following a good path at a junction, and not following a bearing.  Luckily this did not take long to resolve.

Hebden Bridge eventually appeared in the Calder Valley.  Dropping down steeply on an awful path we Googled our accommodation.  This was in Heptonstall so we had a final 150m climb before arriving at 6.30.

It has been a long day but the pub is very comfortable and we rapidly felt much better after a quick shower, beer and meal (although not necessarily in that order).

I should state initially that I quite like farmers and think that they mainly do a good job managing the countryside.  However some are not so good.  Today I was trying to use footpaths, ie public rights of way, to get to Port Isaac only to find huge cereal fields crossed by a public right of way which the farmer had totally ignored.  I was left with a choice of extending my walk or ploughing through his wheat.  I am a country boy so I walked round.  The next field was the same except that the headland was head height in weeds, which incidentally covered a lot of his crop.  I had no chance of finding the stile and footbridge.  Eventually I fought my way through and decided it was too much of an effort so I walked up the roads.  This is obviously what the farmer wants. “Don’t want no people on Moy Land!”

On another farm the path was perfect.

Later, coming along the Coastal Path, one of the most popular walking routes in the country, I and all the other walkers were faced with cows and calves accompanied by two bulls.  The farmer may know that old Billy is a real softy but personally I would prefer him not to be standing on my path.  Surely we could at least be told “Bull in Field”. Several walkers had dogs and were quite concerned.

Farmers have rights but so do we the public.