A much better day than yesterday as it was marginally less hot, with a cooling breeze at times. The route was also more interesting.

I left the rest of the hostel occupants sleeping and crept out at 6.45.

Knowing the Mendips quite well I did not see the need to go up the gorge and climb over Beacon Batch. I took the more obvious route following the Strawberry Line trail to Yatton. That way I got 11 miles done before having a late breakfast at 10.30 in the Strawberry Line cafe at Yatton Station.

Sitting at the station I remembered that in 1978 I caught the early train from there when I first moved to Debenhams. Instead of putting me up in a hotel in London they agreed to let me travel First Class each day. I was only an Assistant Buyer. How the job market has changed.

From Yatton I followed the 3.5km straight of Kenn Moor Road and then took to the fields along the drainage ditch to the Blind Yeo before emerging onto the B3130. All easy walking except for a slight altercation with an over-friendly herd of cows and their big friend.

I was looking forward to some tea, at the cafe at Golden Acres Nursery and Fruit Farm, only to find the whole site derelict and abandoned. Fighting my way through brambles and vegetation I managed to find the exit from the site and continued up to Cadbury Camp.

From there to Clapton Court was a nightmare trying to force my way along a path which was so overgrown I almost had to go on hands and knees to get through at one point.

I stopped for a drink at the Black Horse at Clapton in Gordano before reaching the hotel at the motorway services at 3.45. Just after I arrived there was a heavy shower of rain!!

The hotel is undergoing renovation, so it is cheap, and I can get a subsidised breakfast tomorrow at Harry Ramsden’s.

Tomorrow I cross the Avon and head for Aust.

This was a hard day. It was very hot, there is very little shade on the Somerset Levels, and the route was long and boring. I have joked with several people that if I ever take on another trip it will be in Holland.   Today showed me the error of my ways.

I left Bridgwater at 6.45, crossed the M5, and then made my way, via roads and virtually non existent paths, to Bradney, Bawdrip, Cossington, Gold Corner and River Brue before arriving at Blackford.

The Sexey’s Arms provided some much needed non alcoholic refreshments. 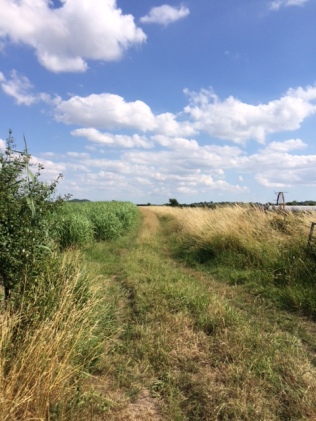 ‘Inferior’ but good track to Cheddar

The trail finally rose up to Middle Stoughton and Brinscombe Hill before entering Cheddar via Cheddar Reservoir.

I arrived at the hostel at 4.40 to find it closed until 5.00. From then on life improved as they had a restaurant and bar.

On a nostalgic note I remembered that Lin and I had our first camping trip together in Cheddar, on another very hot weekend, in 1975.

The best thing to say about the day is that another 20 miles have been completed.

The Mason’s Arms, a 16th century inn, at Williton was very comfortable and I had an early breakfast and was back at Bicknoller by 8.20.

Today started with a 250m climb up onto the Quantock ridge.  The views were magnificent and justified the hard work. Once on the ridge it was easy walking over Thorncombe Hill and Black Hill before dropping down to Triscombe Stone.

The route then goes over Wills Neck 384m, the highest summit in the Quantocks, before unusually not going to the summit of Lydeard Hill but contouring its north slope. Leaving the Quantocks behind I dropped towards Bridgwater across farmland. Here there was the normal problem of paths being nonexistent on the ground or deliberately not maintained. Only in Devon have they been basically passable.

Eventually I reached the road to Enmore and stopped in the village to look at the school. This was established as the first free elementary school in England in 1810 and is still in use. The Tynte Arms provided much needed liquid refreshment.

From Enmore I choose to follow the lanes to Bridgwater via Andersfield and Goathurst. This was uninspiring, but quick, and I reached Bridgwater at 4.00pm and my guesthouse for the night, just in time to see England lose to Belgium. The Admiral Blake Guest House is homely and welcoming but not in the most salubrious part of Bridgwater.  Walking up to the High Street it was noticeable that all the shops had steel shutters.

I am planning another early start tomorrow as it is 20 miles to Cheddar with little opportunity to cut corners and lots of extra miles possible if some of the route is impassable.

Today I crossed the Brendon Hills leaving the Exmoor National Park behind at Monksilver.

I had a late start at 9.00am after a fine breakfast at the Royal Oak. I changed my plan last night when I discovered that the pub had drying facilities so took the opportunity to get some clothes washed. When I was on Ride-Stride-Glide, my John O’Groats to Land’s End trip, my brother Alan took care of all the support work, but this time it is down to me.

Today’s route was a third less than yesterday in distance but with around the same amount of climbing. Basically it was a roller coaster of ascent over ridges before descending to river valleys.

A steep pull up from Luxborough was followed by the descent into Roadwater. Two kilometres of up hill later I went downhill to Monksilver where I had tea at the the pub.

Travelling on to Bicknoller involved another up followed by the inevitable descent. Somehow I missed a turning off of the main route. I was very pleased that I had made an error as I had assumed that the bus stop I wanted would be in the village. However, it was on the main A358, just where I joined, it and a bus arrived within 5 minutes at 3.03.

Five minutes later I was at Williton looking for the Mason’s Arms.

Tomorrow is a much longer day, 25k with 580m of ascent. The good news is that I can get just under half of the climbing done in the first 2km ascending to the main Quantock ridge.

Many thanks to Trudy who got up to give me breakfast at 6.30. Andrew and Trudy at Warren Farm could not have been more helpful and welcoming during my stay.

I left at 7.35 contouring above the Exe before crossing Ellmsworth, Almsworth and Exford Commons. I climbed onto the ridge, which forms the main watershed of Exmoor, at Rowbarrows before ascending to Dunkery Beacon 519m, the highest point I reach until the Black Mountains in Wales.

The route then descends to Dunkery Gate and on to Wheddon Cross.  I managed to get some tea and lunch at the village shop before climbing up onto White Moor and Lype Hill.  I left the proposed route to follow a quicker, but supposedly “inferior”, trail to cross the Washford River at Kingbridge and reached the the Royal Oak at 2.00pm.  As this trail was on a good track down a beautiful valley and the “superior route” would have meant beating out a trail in knee high vegetation I maintain that it was the right decision!

The one excitement of the day was when I put up a doe about 20m from the path to Roebarrow. We were both quite surprised.  My one regret from my days on Exmoor is that I did not see the large herd of stags that live near Warren Farm. Andrew showed my photos of around 50 stags he had seen a week earlier.